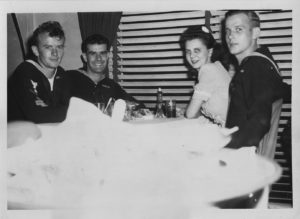 My grandfather served aboard the Partridge, as a gunners mate. He would often talk about his time in the Navy as we floated small wooden boats built in his workshop down the Antietam Creek near my grandparents home in Chewsville, Maryland.   In between the stories of adventure in the blue waters of the Caribbean where dolphins passed through glowing algae and submarines lurked and the preparations for the D-day invasion, there were tales of a captain gone mad and uncanny similarities to a book called The Caine Mutiny.

Read a review of the book here.

As I grew up, the story calcified into family legend.  The topic would come up every few years, usually when Humphrey Bogart would appear on television as Captain Queeg until it hardly came up at all.  The war films of the 1950’s seemed irrelevant and even trite to me and to a generation growing up in the shadow of Vietnam. The 1954 film version of Caine’s features a scene where José Ferrer throws champagne in the face of Fred McMurray.  It was a quaint set piece sharing more in common with white gloved 18th century duels than protracted guerrilla wars, terrorism, and the threat of nuclear war.

In the late 1990s I shared in the collective realization that my grandparents generation had faced a wartime reality  that was much harsher than Hollywood depicted with heroic speeches and marches into the sunset.  They did not live in a simpler, less complex time.  Hollywood only made it seem that way.  Curiosity about my family’s history coupled with a renewed interest in the Caine connection.  I didn’t expect to find much.  Maybe only a brief mention in a Wikipedia article or an online forum.   Instead, I found nothing.

More searches on the Partridge turned up little more than paragraph on her general history and some mail bearing her postmark from the 1930’s for sale on eBay.  Searching the inverse for the true story of the Caine Mutiny, turned up only ships that came after the book was published and the movie released: reflections of fiction in reality.    Even if the Partridge was only a footnote in history as the true story of the Caine Mutiny, either that footnote was missing or it never had much truth in it.

Twenty years after my grandfather passed away, I put the questions to my father.   How similar were the stories?  Was the drama of the Partridge really comparable to Wouk’s story?   How many details really match?  Was it possible that it was all just a distortion through the lens of time?  After all, it was a long time ago and maybe it was time to admit that an old family story was just that.   Everyone in the Navy probably had a Captain Queeg in their war.

But his reply back to me was unwavering, expressing in no uncertain terms that it all happened.  It was all true.  All the hallmarks of the book were there.  Cut tow lines.  Mocking songs.  Even a missing quantity of canned fruit.    He refreshed my memory with a laundry list of other similarities between the events of the Caine and what happened aboard the Partridge.  And he had a list of living crew members.  I could call them and ask them myself.   I commented that someone should talk to the men on that list and write about the ship and its connection to Caine.

Everyone on that list was over 80 years of age.  There wouldn’t be much time left to hear their stories. 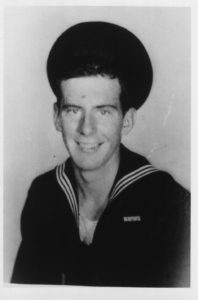 There wasn’t a choice.  The Partridge wasn’t just another war story; it was a hole in history.  Whether or not I could prove that Herman Wouk was inspired by the Partridge was beside the point.  A version of the story existed.  It had happened before before The Caine Mutiny was written.  And I had a list of people that had lived every moment of it.

Wouk’s novel ends with a wistful melancholy as the Caine is scrapped after the war.  Willie Keith, the central protagonist, looks back on his youthful folly that contributed to the mutiny and marvels at how the war has changed him.  Many of the central players in the Partridge’s story were killed or severely injured shortly after their captain was relieved of command. Their story has never been told. Their perspectives have never been added to the literary and historical discussion about the nature of command at sea.

In researching this book, I set off to find out if the Partridge was truly the inspiration for Caine.  Instead I found another story, about people caught up in a narrative of immense proportions, but completely driven by their own actions.   The entire narrative of their lives would effect who they were in the war and what they would become afterward.    This is the story of the USS Partridge, her crew and commanders, and the part she played in the war fought in the Atlantic and off the coast of Normandy. It’s a story of violence, courage, camaraderie, and the topsy-turvy world of military justice. It is a true story, and an untold story from a time and place that has profoundly shaped how we measure heroism, sacrifice, and honor.

Get your copy of A Bird in the Deep

I had a small private event to launch the book in November. It gave me the opportunity to celebrate with family and friends and also to speak about the book in a little more depth. I realized that speaking about the book focused me on not only why I wrote this book...
Read More

Herman Wouk and the True Story Behind the Caine Mutiny  I originally planned to start putting chapters here to coincide with Memorial Day, but the whole scheme also intersects with Herman Wouk's 100th birthday (5/27/2015).  As I mentioned, the story of the...
Read More

What Really Is The Story of the Mutiny on the Bounty? In Bird in the Deep, I devoted a chapter to the mutiny aboard the Bounty. Partially this was because most people brought it up whenever I mentioned the Caine Mutiny, thinking that was the story I was referencing. ...
Read More

Really proud to share the review of my book A Bird in the Deep.  I think it's a great description of the book and the journey to get there: "This well-written history draws connections to an iconic novel and illuminates the lives of World War II sailors." Read the...
Read More

A couple of years ago I was involved in a major bathymetric survey of the Normandy beaches in which we attempted to locate and classify all wrecks along the 5 beaches. One of the wrecks we covered was that of the USS Partridge. Next year a team of divers is planning to visit some of the wrecks located and the Partridge is on the list – although sea and weather conditions may mean the divers do not visit her remains.

HMRT Superman was a British Rescue Tug that discovered the Whale Unit that the Partridge had been towing to Normandy.  Her crew were able to tow the Whale Unit so that it could be used to ferry equipment to the landing force. The ship doesn't figure prominently in the...
Read More

Map of the Partridge Voyage in the Caribbean

Here is a map that Bud Froehlich drew up in 1990 just prior to the last reunion of the Partridge.  If you've ever travelled to that part of the world, it's difficult to imagine it as a war zone.  But it's where the Partridge worked to safe ships torpedoed by German...
Read More

Hi everyone and thank you for all the great comments on the recent photos.  I'm working on getting them labeled, but feel free to comment if you identify anyone in the photos. A few years back, Lisa Knott (who's grandfather Dalton Kirkman father, Joe Feeney served...
Read More

When I first started this project I had the privilege of spending a weekend with Bill and Dottie Ames.  They were a great couple with so much energy and enthusiasm for the Partridge and the crew.  They shared with me newsletters from the late 40s and early 50s.  I was...
Read More

These were photos of the crew that Joe Shannon (Joe Nutt) provided a few years back.  They cover from the Partridge in the Caribbean  until after it's sinking.
Read More