The USS Partridge was a Lapwing class minesweeper built in 1918. The ship and her crew served with distinction during World War II 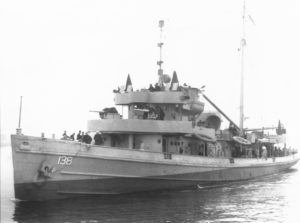 performing salvage operations and towing duties in the Caribbean, along the east coast of the United States and in the English Channel during the D-Day invasion.

The Partridge saved equipment and lives during the German submarine campaign to disrupt shipping. Earning the name ‘The Mighty P’ during salvages operation for the SS Uniwaleco and Lihue among others, the crew performed above and beyond duties that saved lives and, in some cases, towing entire ships to safety.

In December of 1943, the Partridge sailed for Britain performing various towing duties and eventually preparing for the Normandy invasion. During the invasion, the ship rescued a sinking Landing Craft Tank (LCT) and on June 8 took a Whale Unit or Mulberry to be towed to Omaha Beach. About 10 miles from shore at 2 AM on June 11, 1944 the Partridge was torpedoed by a German E-boat killing 35 of the 90 crew members and serious injuring many of the survivors.

About the “Bird Boats”

The Lapwing-class minesweeper, often called the Bird class, was an early “AM-type” oceangoing minesweeper of the United States Navy. Forty-eight ships of the class were commissioned during World War I, and served well into the 1950s. A number were refitted to serve as ocean-going tugs, salvage vessels, seaplane tenders, or submarine rescue ships.

Get your copy of A Bird in the Deep

I had a small private event to launch the book in November. It gave me the opportunity to celebrate with family and friends and also to speak about the book in a little more depth. I realized that speaking about the book focused me on not only why I wrote this book...
Read More

Herman Wouk and the True Story Behind the Caine Mutiny  I originally planned to start putting chapters here to coincide with Memorial Day, but the whole scheme also intersects with Herman Wouk's 100th birthday (5/27/2015).  As I mentioned, the story of the...
Read More

What Really Is The Story of the Mutiny on the Bounty? In Bird in the Deep, I devoted a chapter to the mutiny aboard the Bounty. Partially this was because most people brought it up whenever I mentioned the Caine Mutiny, thinking that was the story I was referencing. ...
Read More

Really proud to share the review of my book A Bird in the Deep.  I think it's a great description of the book and the journey to get there: "This well-written history draws connections to an iconic novel and illuminates the lives of World War II sailors." Read the...
Read More

A couple of years ago I was involved in a major bathymetric survey of the Normandy beaches in which we attempted to locate and classify all wrecks along the 5 beaches. One of the wrecks we covered was that of the USS Partridge. Next year a team of divers is planning to visit some of the wrecks located and the Partridge is on the list – although sea and weather conditions may mean the divers do not visit her remains.

HMRT Superman was a British Rescue Tug that discovered the Whale Unit that the Partridge had been towing to Normandy.  Her crew were able to tow the Whale Unit so that it could be used to ferry equipment to the landing force. The ship doesn't figure prominently in the...
Read More

Map of the Partridge Voyage in the Caribbean

Here is a map that Bud Froehlich drew up in 1990 just prior to the last reunion of the Partridge.  If you've ever travelled to that part of the world, it's difficult to imagine it as a war zone.  But it's where the Partridge worked to safe ships torpedoed by German...
Read More

Hi everyone and thank you for all the great comments on the recent photos.  I'm working on getting them labeled, but feel free to comment if you identify anyone in the photos. A few years back, Lisa Knott (who's grandfather Dalton Kirkman father, Joe Feeney served...
Read More

When I first started this project I had the privilege of spending a weekend with Bill and Dottie Ames.  They were a great couple with so much energy and enthusiasm for the Partridge and the crew.  They shared with me newsletters from the late 40s and early 50s.  I was...
Read More

These were photos of the crew that Joe Shannon (Joe Nutt) provided a few years back.  They cover from the Partridge in the Caribbean  until after it's sinking.
Read More